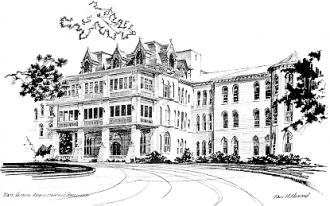 The former St. Joseph State Hospital Administration Building is pictured to the right. It is now a part of a correctional facility.

"State Lunatic Asylum No. 2" opened in November of 1874 on recently purchased land east of St. Joseph. The original 275 beds filled quickly. The hospital was pretty much self-sufficient, raising everything patients consumed. (It has been said that the only thing purchased from outside was salt!) A devastating fire in 1879 only temporarily slowed the hospital's growth. When it reopened in 1880, the facility became a sanctuary for the special people society didn't want.

By the early 1950s, the patient population had grown to nearly 3,000. Treatment was virtually non-existent: there were too many patients and insufficient staff to provide more than custodial care.

Over the years, downsizing occurred with the advent of better treatment options, modern antipsychotic medications, and emphasis on returning patients to less restrictive living arrangement in the community.